Flooding in the vines. Will they live?

Winter 2021 was the wettest in Perth that most of us can remember, one of the wettest since records began☔.

The Swan River has risen up, broken its banks and now we've got the Swan River running right through our vineyard🍇- imagine the volumn of water that has flown through!

The grapes for our Reserve Shiraz are grown in the gully- this gully has been carved out by flood waters over the years..however now the river seems to have reclaimed it.😏

What does the river flooding mean for the grapes?

Fortunately it is winter and that's when the vines are dormant, they have shed all their leaves and have a 'bit of a rest' before Spring comes and they begin their growing season. 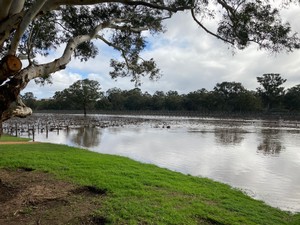 This means that the flood waters aren't damaging the vines, as the vines are in hibernation!

The damage is being done by all the rubbish, the flotsam and jetsam that is being washed down river by the massive flood waters.
There are branches and logs from fallen trees, rubbish from paddocks and even great big piles of our vineyard posts that are getting slowly washed down through the floodway😥.

This rubbish is getting caught up or tangled into the vineyard trellis. The trellis is the posts and wires that support the vines as they grow, however as the branches and debris get caught up in the trellis it starts to create a barrier or dam to the flood water.
This means everyday the pressure on the trellis increases and I can see it's being pushed over a bit more each day.

The clean up is going to be massive, there will be a whole lot of muddy, grassy, smelly sediment left behind once the water stops flowing, covering everything that was under the water.

At the beginning of July we had two weeks of almost uninterrupted really heavy rains, but the flooding really begins in the wheat belt.
When the wheat belt gets really heavy rainfall, first it penetrates the soil, but after that's saturated the water will run off, making its way into creeks and riverbeds which funnel down to the Avon River feeding into the Swan River.

Summer Rain is much, much worse

A cyclone in the north of WA caused unprecedented rains and floods, in Perth but also in the Swan River's catchment areas.

The rainwater came rushing down the river valley, the Swan River flooded its banks and started running through the middle of our vineyard. A nerve-racking night.

The water kept rising for a couple of days, stopping just at the base of a retaining wall.

It was devastating we lost the whole of our premium Reserve Shiraz wine crop, after spending all year growing the grapes.